On 20 October, the Central LNG-owned LNG bunkering vessel Kaguya supplied LNG to Sakura Leader, an LNG-fueled PCTC (pure car and truck carrier) operated by NYK that is under construction at Shin Kurushima Toyohashi Shipbuilding Co., Ltd. This is the first time LNG fuel has been supplied through ship-to-ship LNG bunkering in Japan.

The International Maritime Organization (IMO) has established the goal of reducing greenhouse gas (GHG) emissions from shipping by at least 50 percent by 2050 compared to 2008, and many LNG-fueled ships are expected to be produced going forward. JERA, together with its business partners, established Central LNG in May 2018 in preparation for the launch of its LNG bunkering business. Construction of Japan's first LNG bunkering vessel, Kaguya, began at Sakaide Works (Kawasaki Heavy Industries, Ltd.) in July 2018 and was turned over to Central LNG this September.

JERA will continue to provide a stable supply of LNG fuel to Central LNG while driving the conversion of ships to LNG fuel by promoting the LNG bunkering business through this joint venture, thereby helping to reduce the impact on the environment. 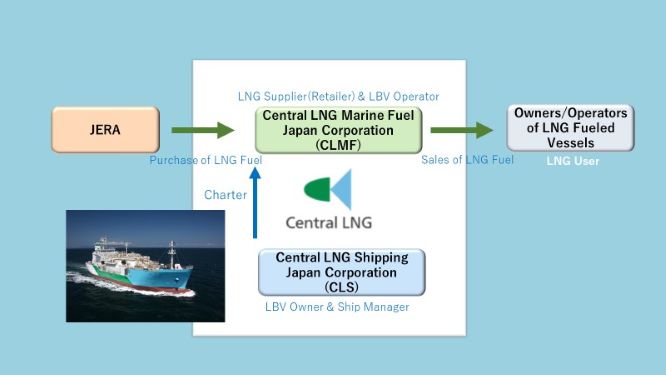